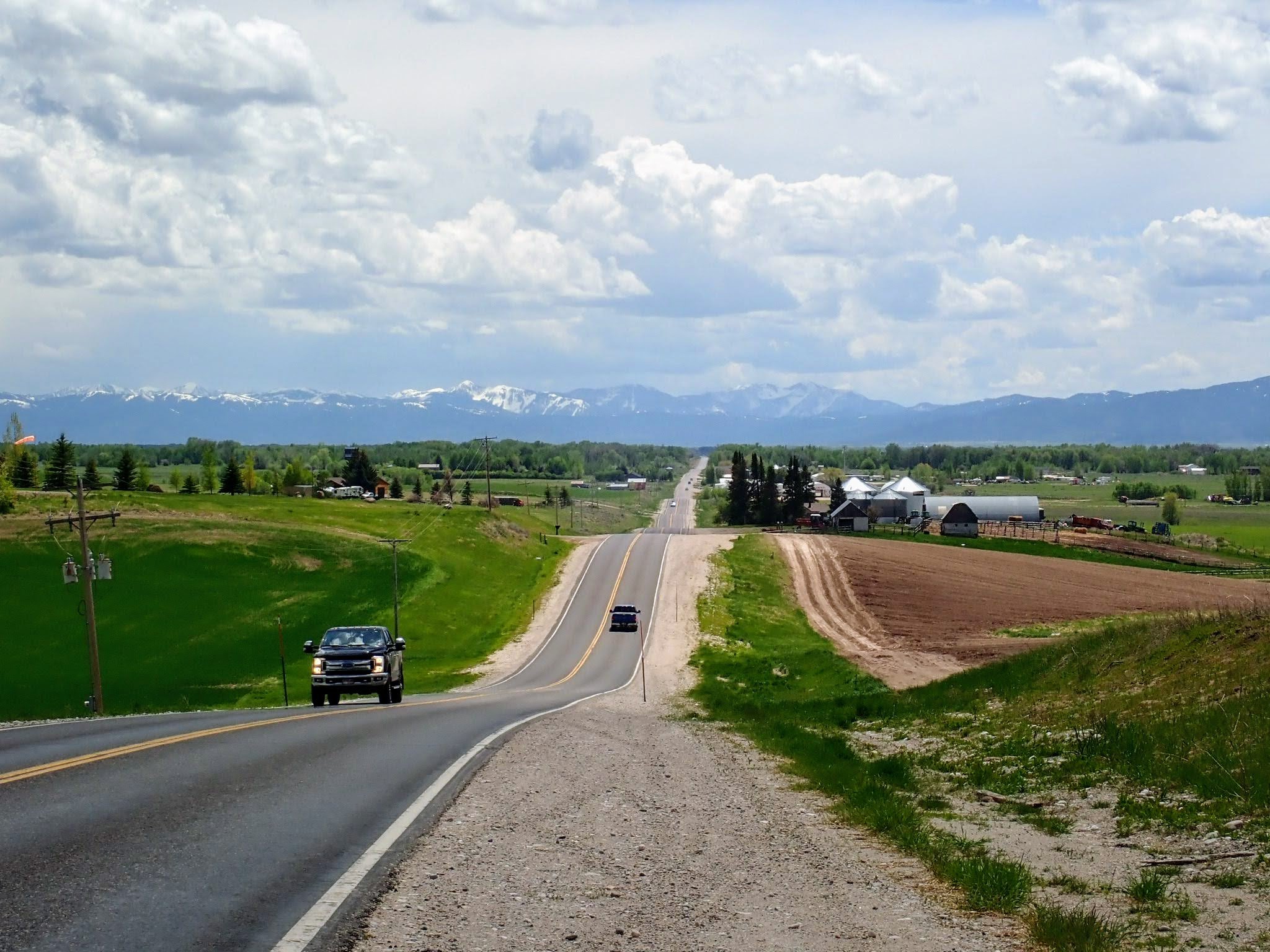 My bicycle is my freedom machine. Whether it’s for transportation, recreation, exercise, or a way of traveling the world, cycling is one of my favorite things.

But my least favorite thing about cycling? Riding in traffic. Maybe you can relate?

In most places in the world, and certainly here in America where I live, roads are mainly designed for motorized vehicles. If you want to try and claim your space as a small and vulnerable human on a slow pedal-powered contraption, you need to be smart in order to stay safe.

Sadly, injuries and fatalities can and do happen when things go wrong for cyclists in traffic. In the United States in 2018 alone, 857 cyclists were killed in traffic accidents. We need better infrastructure, like bike lanes, to protect us, and we need drivers to pay attention. But we also need to do everything we can to ride carefully and defensively, because infrastructure isn’t good enough in many places, and drivers make mistakes.

There are already plenty of great guides out there on traffic safety for cyclists, so why do I want to add one more? Because I’ve ridden my bicycle 10,000+ miles in 9 countries over the last few years, and I’ve learned a few things that I feel aren’t covered adequately in most of these guides.

I’ve had a few close calls, and I’ve learned the hard way that some of the most important bicycle safety guidelines are not always what you would expect.

First, a few basic rules that are fairly intuitive:

Those are all very important, but probably not too surprising if you’ve been riding for a little while.

Now, let’s get on to the cycling safety rules that might not be as obvious.

When you’re feeling the squeeze on a busy road, that sidewalk looks oh-so-tempting. Yet it’s probably not the safest place to be riding. Drivers aren’t processing every detail; they’re scanning the street in front of them, and they’re not used to looking for bicycles zipping along the sidewalk. It’s all too common for a car to make a turn directly into a cyclist where the sidewalk crosses a side street or driveway.

Technically, in the US at least, it’s actually illegal to cycle on the sidewalk. Many cyclists do it anyway, and some drivers actually believe that we’re supposed to (I was once asked not-so-politely to “get on the f-ing sidewalk” by an angry driver in rural Missouri). We need to work on changing this perception.

That said, there ARE times when I will bail to the sidewalk and recommend that you do too. On streets with fast, heavy traffic and no shoulder, especially where there are not multiple lanes that would allow drivers to pass you safely, sometimes it really is better to poke along on the sidewalk. Just be especially alert whenever crossing driveways or intersections, and yield nicely to pedestrians.

Don’t Hug The Shoulder Too Closely

Simply put, don’t be a gutter bunny. I know it feels safer to hug the far right edge of the road, but this can be dangerous for several very important reasons:

Hopefully you can see that as tempting as it is, hugging the gutter can be dangerous. But if we’re not riding close to the edge, doesn’t that mean we’re blocking traffic? Which brings me to…

Wait, what? This sounds like a surefire way to get flattened, or at least a honk and a one finger salute from the angry drivers behind you. But “taking the lane” or “controlling the lane,” as it’s often called, is sometimes your best option.

Though not every driver knows it, cyclists actually have a right to use the full lane when necessary. When is it necessary? To avoid all the dangers that come with being a gutter bunny (see above).

Of course you don’t want to do this ALL the time, and you will need to use your best judgment about when it’s appropriate.

Good times to take the lane include:

To take the lane: start your movement well in advance, look over your shoulder and use a hand signal to show your intent, and then smoothly and predictably move left when there is a safe break in traffic.

While it’s your right to take the lane, I probably don’t have to tell you it’s courteous to not delay drivers more than necessary. A good rule of thumb is to pull over and let them pass when five or more vehicles are stuck behind you. I usually pull over even sooner, and if I’m actively blocking traffic I make sure I’m riding purposefully, not lazily dawdling along.

They may look dorky, but I’m a big fan of rear view mirrors (this helmet mirror is the best I’ve found) for cycling in traffic. They let you keep an eye on the vehicles behind you on busy roads, and also spot infrequent cars on quiet roads without constantly looking over your shoulder.

But, I have spent enough time with one eye on my helmet mirror to know they can actually be dangerous too! Here’s why:

Which brings up my next cycling safety tip…

Don’t Worry So Much About Drivers…

… that you stop worrying about your own riding. I learned this the hard way during one of my closest calls ever. While riding the potholed shoulder of a fast highway in rural Missouri, I worried so much about the cars whizzing by to my left that I didn’t notice the pothole right in front of me.

The pothole knocked me off balance and sent my body falling uncontrollably toward the left, where cars were passing at 70mph. I hit the pavement just outside the white line, fortunately, and when I dusted myself off the only damage was wounded pride and an adrenaline overdose.

I learned an unforgettable lesson that day: motor vehicles are not the only source of risk. Maybe I’m more likely to be injured by getting distracted and making a mistake than I am to be hit from behind by a vehicle.

Don’t Be Too Careful

Ok, technically careful is good, but sometimes cyclists confuse “careful” with things like nervous, tentative, and reactive. This leads to unpredictable riding, sudden moves, ignoring what’s in front for what’s in the rear view mirror, and the dreaded gutter bunny syndrome discussed above.

All of these habits make us more vulnerable to crashes.

Your goal as a cyclist is to know the biggest risks, ride smartly to reduce them, and stay aware of your surroundings. THAT is being careful. You can still by careful and also ride predictably, smoothly, and when necessary assertively, as when taking the lane to ensure your safety.

A note for those who travel by bicycle, one of my favorite ways to see a new place: this is also very true overseas. I’ve cycled in highly chaotic traffic in cities like Hanoi, Vietnam and Khartoum, Sudan. In these places, if you hit the brakes at the wrong time or make an unpredictable move, you’re toast. It’s all about going with the flow and following the local “rules” of the road as you blend into the organized chaos.

As you can hopefully see by now, some important bicycle safety tips are counterintuitive.

Instead of focusing on staying out of the way, try to ride predictably and assertively.

Worry less about the traffic behind you and more about what’s in front of and beside you.

Stay alert but not nervous, be unmissably visible, and communicate with drivers via body language and eye contact.

If you do all those things, your odds of a safe trip are high! Enjoy the ride.

If you’re into cycling, you might also find these helpful:

Your experienced riding buddy in eBook form: 140 mobile-friendly pages packed with how to’s, problem solving tips, and hard-earned wisdom from the trail and road.

2 thoughts on “6 Counterintuitive Tips for Bicycling Safely In Traffic” 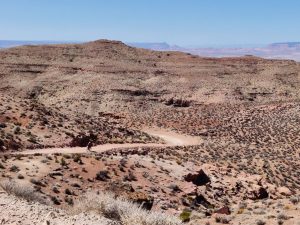 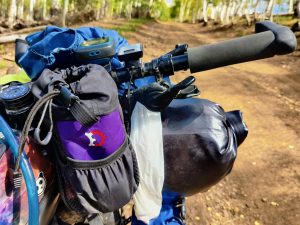 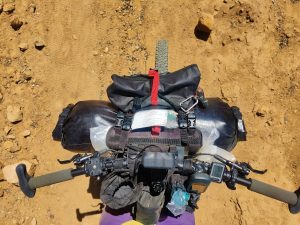 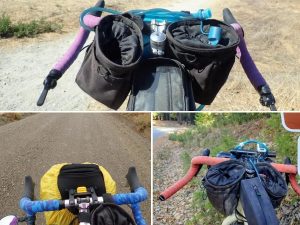