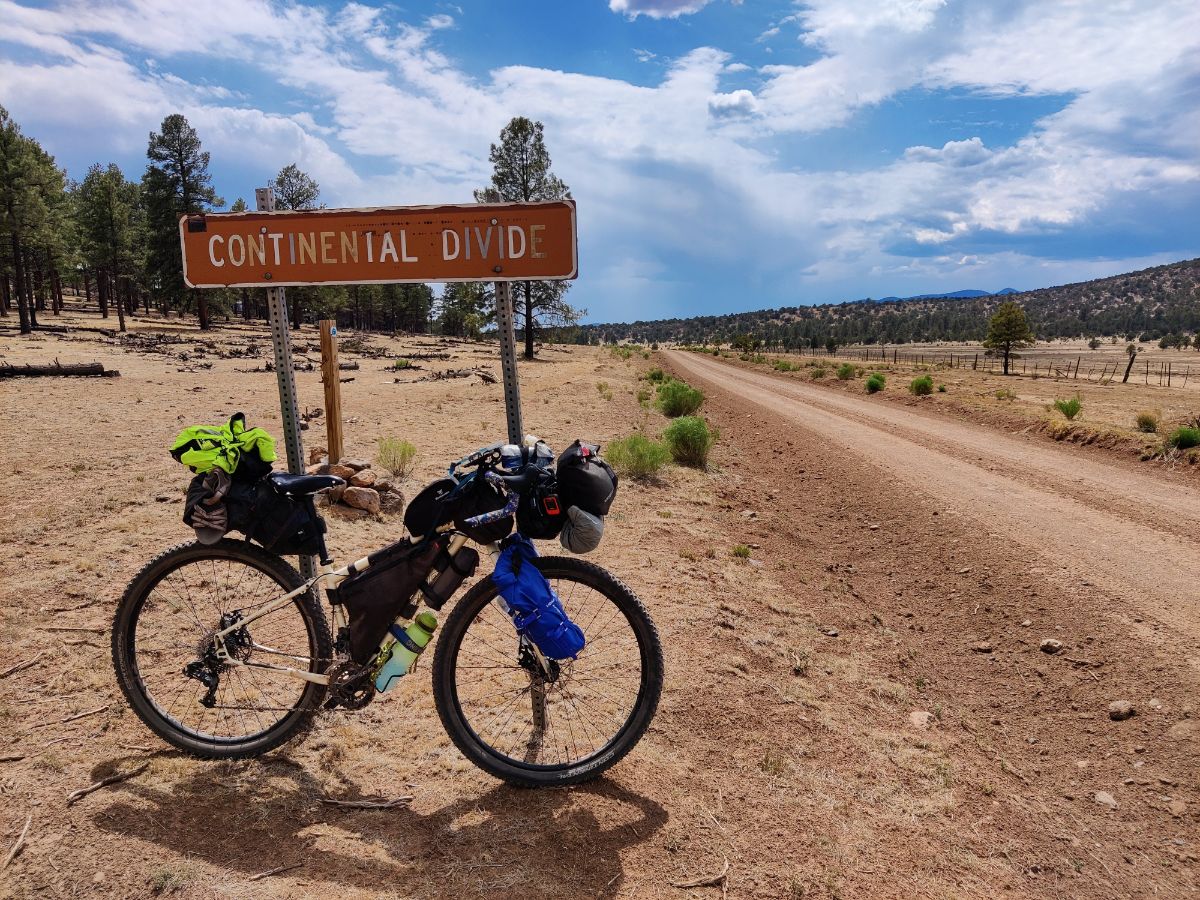 How to sum up two months on the epic Great Divide Mountain Bike Route? It’s impossible, really, but this will be my attempt.

As I look back on my notes, it’s all a blur! Before the details fade, I’m compiling my impressions into a series of posts. I’ll go state by state and highlight how I felt about each section, what stood out the most, and a few things I wish I’d known but didn’t find in other resources. This post covers the first state: New Mexico.

These are the nitty-gritty details, and you might want to download this post offline on your phone to read on the trail. A lot of this probably won’t seem very important until you’re out there. That said, if you’re still in the dreaming stage of trip planning, you might like skimming through the pictures and narratives for an overview of the route.

For the rest of the series, visit these other posts:

Summaries from other sections:

Overview of My Ride

I suspect New Mexico presents itself very differently to northbound versus southbound riders. As a place to start, I thought it was perfect. Knowing that I would soon spend many weeks in the mountains, I relished the heat of the desert in those first few magical days when everything was new and exciting.

When the wide open landscapes finally transitioned into forests, I was delighted. “This doesn’t feel like New Mexico!” I exclaimed over and over (in my head, to myself, while riding solo). The empty forests and green hills of northern New Mexico were endlessly surprising and fascinating to me.

New Mexico offers a lot of peaceful riding, but it’s also home to several of the roughest and rockiest sections of the entire Divide and long stretches without food and water. Heading northbound, you’ll have some of the toughest terrain and longest carries behind you by the time you reach Colorado. Heading southbound, at least you’ll be in good enough shape to deal with it.

Only when I reached the busier roads of Colorado did I realize how much I’d been spoiled by New Mexico. Colorado may have bigger mountains and more dramatic views, but I think New Mexico remains my favorite state on the GDMBR for its variety and wildness.

Hot weather and crosswinds greeted me at the start in Antelope Wells. Just a couple days earlier it had been 100+ degrees, so I was relatively lucky! Jeffrey dropped me at the border post, took a few pictures, and zoomed off in his truck. Suddenly I was alone and staring ahead at 2700 miles of bikepacking. Here goes nothing!

The first couple days were a gentle start. I did my best to ease into this long undertaking and work through the jitters that always accompany the start of a big solo trip, at least for me. Various small issues had me worried – squeaky pedal, lost handlebar plug – but nothing really slowed me down.

The route is entirely paved through Hachita to just before Separ, though traffic was extremely light since the border crossing was closed. I arrived in Separ just after the store closed for the evening, but Jeffery had told me the owner welcomes cyclists to camp outside her fence next to the flagpole. When I stopped in for breakfast in the morning, she confirmed.

The second day finally led me off pavement and onto a nice section of dirt ranch roads and BLM land. By the second night I was in Silver City, a pleasant community with all services.

After a restful night at the Triple Crown Hostel and a bit of pavement to Roberts Lake, this section was dominated by the remote and rugged roads of the Gila National Forest with some flatter ranchland interspersed.

In this section I had the privilege of crossing paths with the front end of the Tour Divide pack. Those folks are truly impressive, and I was grateful for their presence in this otherwise fairly empty area. Could it be that riding a bicycle out here is almost a normal thing to do? Emphasis on almost.

I arrived triumphantly in Pie Town four days after leaving Silver City, after dodging thunderstorms all day. The famous Toaster House offered a warm welcome, and I was surprised – after seeing no other northbounders so far – to meet four other northbound cyclists there! The social buzz was simultaneously refreshing and overwhelming after so much time alone, but I was glad to meet a few cool folks who I would see again later down the trail.

The next morning north of Pie Town the landscape opened up again. It had been raining quite a bit, so I opted for the paved alternate. A single day of gravel roads and pavement brought me to Grants and my first rest day.

Due to recent rain I took another paved alternate all the way from Grants to Cuba. I was sad to miss one of the most unique and remote parts of the route, but didn’t want to deal with death mud. See the alternates list for more info.

The paved alternate was mostly pleasant, with wide-open views and light and polite traffic. Headwinds were an issue here and there. This section travels through some Navajo communities that are unique along the route. Everyone I met was nice, including a man who stopped his car to offer me a water bottle just outside Whitehorse. I camped at the friendly Chaco Trade Post and enjoyed a feast of convenience store food for dinner.

The gritty and bustling town of Cuba was overwhelming to me, and I struggled to find a place where I felt relaxed enough to eat and recharge (mentally and literally). After striking out at McDonalds (how can McDonalds be out of milkshakes?) I ended up eating from the small grocery store across the street, waiting for a storm to pass, and then pedaling out of town.

Northbound of Cuba there’s about ten miles of paved climbing, some quite steep, with a good shoulder. The reward is turning off into Santa Fe National Forest on peaceful dirt roads with great free camping. I camped shortly after the turnoff from the paved road, not far from a few families in their RVs, and had a peaceful night.

The forest roads eventually turned rocky and rough, and I did some hike-a-bike up toward Polvadera Mesa. I began the rocky descent just before dark and was immediately caught in a raging thunder and lightning storm! After dropping a little elevation I set up my tent in the forest and hopped inside to hunker down.

It stormed through most of the night, but the morning was peaceful and the long descent into Abiquiu went quickly. Bodes General Store in Abiquiu was a welcome chance to eat a hot meal (or two) and recharge electronics.

Many riders spend nights in both Cuba and Abiquiu, but I passed through both during the day. With such abundant and beautiful wild camping in this area, I enjoyed spending my nights out in the wilderness (and it saved me money too).

This was another long and tough but enjoyably remote section. Heading northbound there is a surprising amount of climbing in this stretch – don’t underestimate it!

North of Abiquiu the route links several small communities (El Rito, Vallecitos, Cañon Plaza) through a pleasant rural landscape. North of Hopewell Lake (a big busy campground) there is a more remote section through Carson National Forest all the way to the Colorado border.

Brazos Ridge, on the edge of Cruces Basin Wilderness in the far north of the state, was beautiful and surprising. I hadn’t realized New Mexico included this kind of scenery – endless green rolling ridges and healthy pine forests. A few short sections were very rocky and reduced me to hiking, while thunderstorms churned constantly somewhere in the distance.

I was delighted to find that shortly after crossing the Colorado border, it felt like Colorado. A paved highway lead to Horca as the scenery already became more dramatic, characteristic of Colorado. The gravel superhighway to Platoro felt unpleasantly busy and dusty after quiet New Mexico – welcome to Colorado!

Read Next: Bikepacking the GDMBR #2 – Colorado

New project!
BikeSleepBike.com
Discover bike travel and bikepacking blogs from riders all around the world.

Hi there, I’m Alissa. I’ve traveled over 14,000 miles (enough to stop counting) by bike and still can’t stop planning my next ride. Pavement and panniers or singletrack and seat bag, I love it all. On my bike I feel free. Learn more or say hi.

Excited about bikepacking but need help getting started?
The Bikepacking Trip Planner Workbook could be the nudge you need to get your wheels rolling. 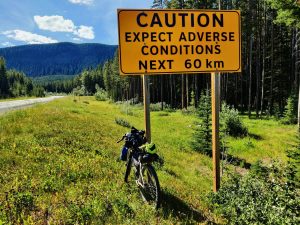 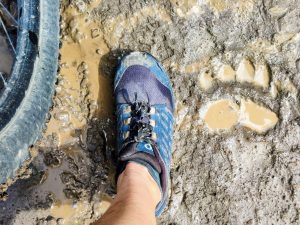 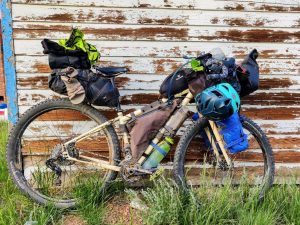 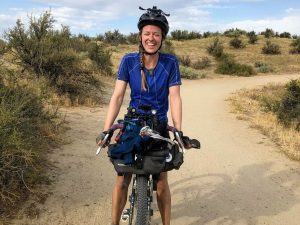